I used a xmas gift to take some of these, its a wireless usb handheld microscope. http://www.thinkgeek.com/gadgets/electronic/c6d1/ 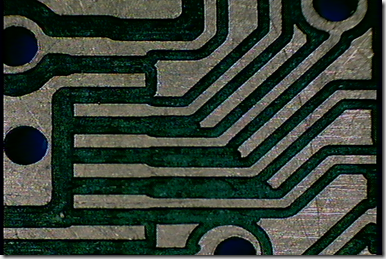 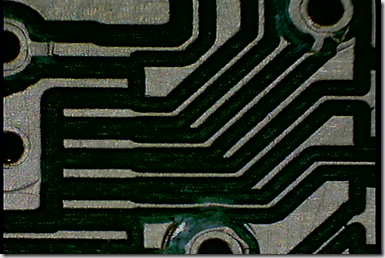 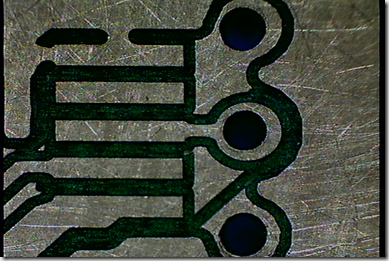 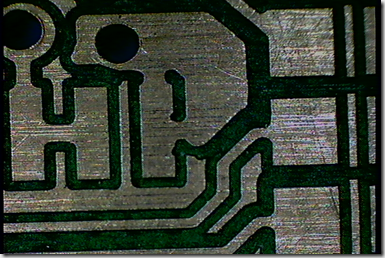 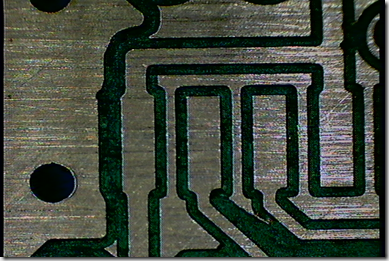 Those are 8mil traces. 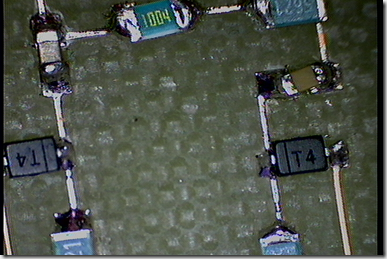 I used a BusPirate V3 board to test out these rivets. They are effectively thru-plating for PCB’s, normally you need to do messy multistage chemical stuff to do it at home. This isn’t as good a result as a chemical plate but it makes up for it in ease of use. It’s not the cheapest option, which is usually just using a bit of wire in the hole and hand soldered in, but that can cause problems with VIA’s under flush mounted  components.

Basically you put a rivet in the hole, flip it over and hit with an automatic center punch.

BusPirate Dangerous Prototypes ( Buy one of them at http://www.seeedstudio.com/depot/preorder3-bus-pirate-v3-assembled-p-579.html and support the effort Ian is making )

Here are some of the results so far. I didn’t spend as much time as i ought to have aligning the backside of the board, so the drills are slightly off.

Bottom side, they take up less space on the side that’s being compressed.

I used a needle to insert them one a time, a wire strung with a bunch might work. 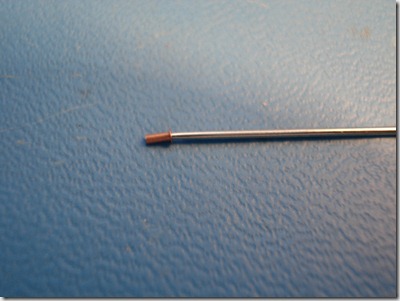 Takes a little practice to get them smooth, making the automatic center punch ‘snap’ is key. They’re almost flush when that happens. (circuit in the back is Jack Gassett’s butterfly (the logic analyser update for the sump) http://blog.gadgetfactory.net/ )

some closeups with the HiView wireless usb microscope, because of the way it works you see black rings where there is really copper if its an angle.

This one went funky, needs some after attention, I didn’t put the center of the punch in the rivet !

trying out different pressure settings on the punch 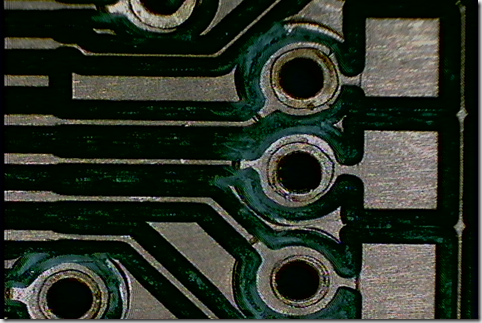 For some reason, which i haven’t checked yet the mill line routed around it, instead of through it, which caused it to be larger. I had this issue once before, last time i used the rectangle tool and this time the line tool, since i wanted a gap, which I set to two 0.05” grid spaces, that was slightly too much. I also cut it a bit deeper when doing the isolation routing. (Adding some notes to older posts: The reason it cut around the trace instead of through it was that the CAM file i was using had the dimension layer and not the milling layer, using the polygon tool on the milling layer fixed it, using a 0 width wire cuts around it)

I built the tool table this time. Which means you get something like this –>

However I did notice that it refers to T0 which is the bit number in the specific tool list, there are three 1. Isolate 2. Drill and 3. Route. So instead of getting the index from the master tool table, you get the one from the subset. It also counts from 0 for the tool change prompt, but the master Tool Table counts from 1. Also on the isolation rubout, it adds the isolate size to your set, so if you define 3 bits in the drill tool table, it’ll add one ( if its not already included ) and that one will be the isolate bit, usually the V90/60/45

Though its got some funky routing :)  and i didn’t quite drill all the way through, this board seems to be right.

I redesigned it a bit and recut it, a small error in one of the rubout tool changes. The main thing i wanted to get rid of was the trace in the middle left, that cuts through an 0603 package, though on the new one one of the transistors traces is going back under itself. I also scanned this one at  2400DPI, seemed to work better.. 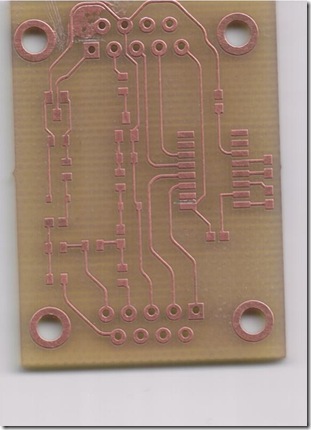 The first video I made of the machine cutting a PCB. The sharper eyed might notice the bit is the wrong type ( 18 mil drill vs a V bit!)

The double sided PCB’s are helped out by the camera, you basically find two drill holes, align the camera to one, find the drill hole that matches on the gerber , centre the cursor on that , right click and it moves the Gerber’s to match, second hole does the rotation.

Drill Test, trying different depths with the V90 bit, the software has a couple of extra modes to help get rid of the bits that come loose if different drill paths are too close, one is an extra isolation remove. This one I haven’t tried yet, it cuts away a little extra isolation to help with potential shorts, the second mode is rubout, you define a rectangle in the mech layer, or in PhCNC and the software calculates which areas to remove leaving just the tracks, this is heavy on the drill bit usage and takes a lot longer, you end up changing tools maybe 3 or 4 times. The good thing is you can try out nearly everything the machine can do with the demo version of PhCNC (Except camera), it does a cut simulation too.  http://www.accuratecnc.com/download.html

Not deep enough, These next images are after the double sided cut , checking alignment, the blue areas are the drill path, the black is the copper left, as you can see they match up pretty good. 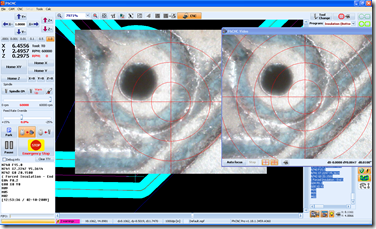 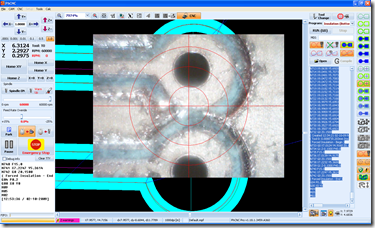 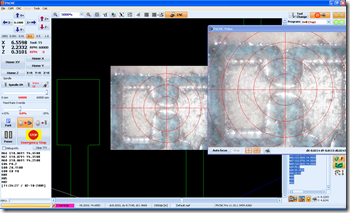 Find and align the first drill hole. I just did a rough guess watching where on the PCB the camera was and then used X<> Y<> to find it, make sure you focus the camera first

Then just match up the red circles as close as possible.

The routing of the circuit isn’t yet complete, its just a quick 10mil auto trace in eagle.

So this came out pretty good, there are still a few traces connected that ought not to be, the drills are slightly off to the right, and didn’t realise it was a double sided board!  whoops ( single sided pcb material)

But I’m happy with the progress. This is a fairly complex board with some small traces and it had some DRV’s so its not unexpected that it failed in some parts, and i did run it through twice.

Changing the drill bits isn’t that hard, and I still dislike imperial, the software shows things in inches, and not mil’s or cm and not mm’s, the drill bits are marked in mils, so just shift it left so not a big deal, its just annoying switching back and forth, I didn’t realise AccurateCNC offered a metric version, wish I’d realised beforehand, though its just really the micrometer.

The Z axis/depth setting for the bit seems to be sticking a little bit, so I have to watch that when I’m setting a depth.

For drilling depth, I kept a piece of PCB that is the same as the one mounted, and just measured the depth from that.

It’d be nice if the Z went up during the tool change, but i think its like that since it’d be really slow to change the tool out. Other things I’ve noticed as just small things

1. Camera chase mode, be nice if it automatically switched on the video feed if its not on.

2. DRC/DRV, if there any it warns you with a popup box, especially about the forced isolation mode being off, I’ve missed it a few times and the board will likely not cut properly. Probably a good reason, but I don’t see it yet.

3. USB camera doesn’t work well if there are two cameras on the same hub ,even on 2.0, haven’t tried it on a separate bus yet. Really not that big a deal, remote monitoring the CNC. Likely nothing to do with the PhCNC.

3. Resizable video window, it gets in the way, you can make go away altogether, but I’d like it smaller sometimes.

4. Video viewable in CAM mode, i use mplayerc.exe for this (Media Player Classic), you just have to keep switching and it doesn’t do the light/autofocus.

5. Ability to record/remember each of the previously captured camera locations, that way you can build a larger area or refer back to it when you’re elsewhere with the camera, so a bitmap layer.

I also noticed that when I did the thumbtacks for the mounted PCB boundary to lay the cut in CAM mode, when flipped to CNC mode, the image mirrors horizontally but its no longer inside the thumbtacks, not sure why yet.

Ever since Defcon I promised to get her indoors a Ninja Badge, I got hold of one by fixing one of the bad ones, but I gave it back to the guy who won it in the Q&A in the HHV, the answer being charlieplexing, which I’d shouted out being too late to have heard the rules.. Luckily the good guys behind the design uploaded all the schematics and Gerber files, so easy to reproduce one.

This was with the V90 bit and it came out pretty well however there are DRV’s so it won’t work. Which is a shame because this is first complex board that cut ok. Interestingly though the depth has changed between the start and the end of the run, if you look on the top left, you’ll see the Credits and the Gerber had the EDITS at the start, and CR at the end, so you can plainly see the depth difference. As well as the “ton” part of Creighton, and ox.com> of pobox.com

I had another go at it this morning, I did tool tests at each corner of the PCB and got the depth as it looks like it ought to be, but the board came out much worse than this one…  I probably need to verify the minimum trace size, but i couldn’t get a full copper cut with a smaller trace.Oh well the learning process goes on.

I just hope the worlds supply of PCB material holds out, I’ve already emptied out our local Fry’s Electronics.

Took a video of the second attempt