More of a blog entry than a project one.

Sort of a milestone this weekend, we actually spent time making parts for a robot we’re trying to get ready before the end of the month. For a short while it was even like a normal CNC shop where we are popping stock on, cutting it, and repeating.

One thing that happened was during cutting and such, the power went out, on a couple of circuits in the house for a brief moment, no breakers tripped, computers reset (added a ups to the computer+cnc controller) and hte cnc controller had a few disconnects, which has never happened before the VFD/drive update, funny that huh?

So we have inline fuses, EMI line filters, zero phase reactor, which is a cool name for an RF filter which helps with current spikes and bad harmonics being introduced to the motor, helping it run cooler and last longer. also line reactors lcvette on cnczone made a nice list, which i found of course after we saw the issues.

Adding all that stuff should keep the rest of the equipment running without being spiked, its already bad enough we’re running CNC machines via USB but that is another issue altogether ( also usb is in general just terrible )

Next we ran into issues with the general purpose motor, which was expected since a general purpose motor can’t deliver the torque at low RPM’s with VFD control, you need an inverter duty motor which can do all sorts of fancy things, normally they’re about double the cost, but ebay always seems to have a stock of them, i like the marathon black maxes,, it is 50lbs. vs the 25lbs of the current motor. and it’s 1.5 HP however we need low RPM’s for drilling etc, once you go below about 31 hZ on the VFD the torque drops off dramatically.

Luckily a 145TC mount should fit into a 56C mount , different shaft size so a new pulley anyway, its a 1800 RPM vs 3600 RPM but we should be able to overspeed it 2x, and also a larger pulley , 4" is the current thinking.

we’ll put the 1HP motor on another machine, so it won’t go to waste.

The motor probably won’t arrive til next week, so we’ll have to brave on with the "oh look i can stop it with my hand at <1000 RPM" motor. On that note, does anyone else worry about VFD control that uses a membrane keypad to start the motor versus a nice e-stop style switch, you think a lot about these things while trying to remove a 3" face mill which someone put 20 lbs of torque on.

You can wire up a 24V style run/stop switch to the VFD but since its a digital input around a lot of noise (albeit 24V) it still makes me think about a disconnecting switch. I’m sure its completely fine though in a few weeks expect a , and yes i have less fingers and a giant hole in my hand now update.

So far the VFD has been great, you lose the pot to set the speed on the GS3 vs the GS2 so its an up/down and a bit of a chorse, so adding an RS485 to USB(sigh) so the super fancy FlashCUT PRO 8A Stepper control can control it you say, well no turns out the $3000 or so can’t handle 24V, IO, not can it talk to a VFD directly, and no 0-10V , the plethora of Mach3/4 controllers for about $150-$500 do support it. To be completely fair there is an add board (or two) that you can install inside the PRO series FlashCUT, but i’m betting its at least $500 to add which is outrageous and their jog controller is still a crappy USB pad that adds yet more latency to the system, it’s still pretty much a closed system with no cool scripting, so i’m feeling a move to Mach4 coming on. I hadn’t considered it because I like the backlash compensation, turns out Mach3/4 supports that. As far as i know there are no open source CNC controllers with backlash compensation, its really useful because you can do this sort of thing 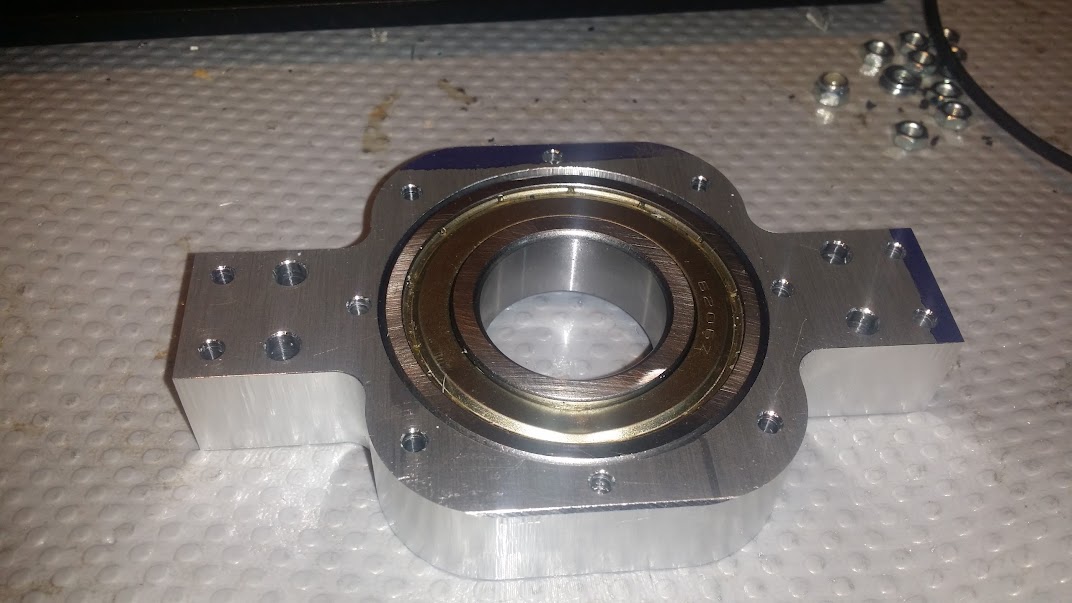 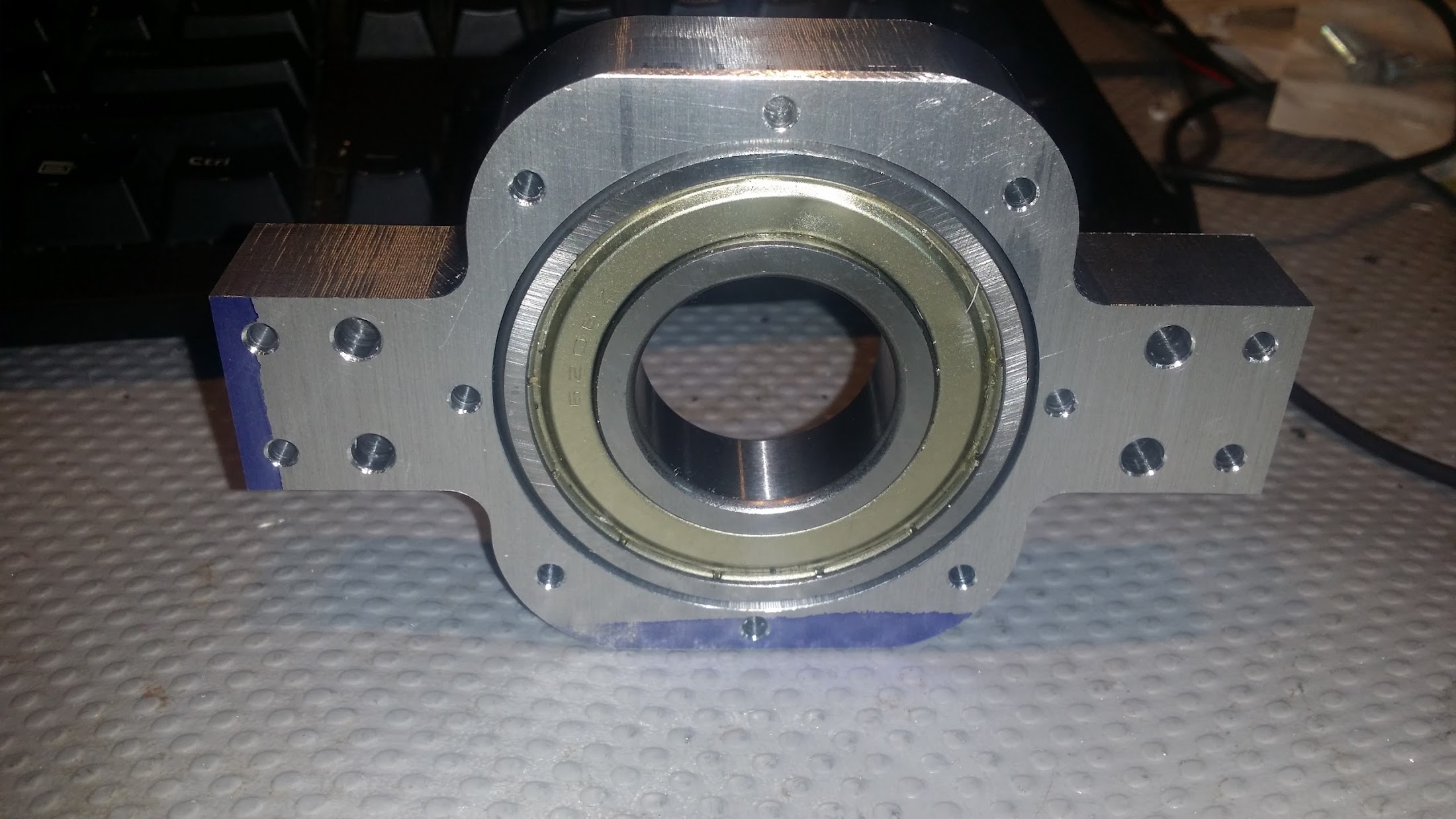 A fit bearing directly off the machine, with no boring bar just an end mill. this is really hard to do on lead screws, and on C7 ballscrews still hard on a hobby level CNC, since backlash. Backlash is the amount of movement the axis motor has to make when reversing direction to physically move the head, its like slack , you know like when you move your steering wheel back and forth and theres some give on the rack/pinion before it engages, similar thing. backlash compensation knows about that slack which is fairly constant and computes where to add it on so it knows to move a little bit extra when changing directions.

Circles are one of the worst cases for a machine with backlash, i’ve covered it before and shown results which on the leadscrew/base FlashCUT were awful, they’re barely what you could call circles and now we’re end milling, deburring the edge and dropping bearings in.. just like that, thats because of backlash compensation, sure you can try, and you should, to remove mechanical backlash as much as possible, but even a mori seki/hass has backlash compensation, they even have pitch correction etc, since a ballscrew might not be entirely linear movement and there will be spots where one rotation doesn’t move as far as in another spot.

Circles are bad since they have a lot of axis reversals during the cut, we’d improved it no end before. This time though we started in on the smoothing and acceleration curves of the motor control. Setting how fast it would accelerate . This also helps with cutting as well as it allows smoother transitions between GCODE operations and allows them to calculate say a single axis line move + an arc into one smooth movement with no pauses. Think of it like driving again take the track, the difference between you knowing the layout of a blind corner and never having seen it, with the known corner you transition from the straight into the curve, hitting the apex, having reached corner speed at entry, and then smoothly powering out of the corner into the straight, much smoother. If you don’t know anything about where you’re going,, you would generally approach slower, not take a smooth line and lots of corrections, then not be the right speed for leaving the corner, its slower, and less optimum and possibly loss of some rubber and nerves. backlash compensation+accelerating profiles = knowing where you’re going. I see lots of the projects saying its not needed, or low priority, but it is very useful to get the machine producing better results. its a shopping trip to walmart vs a lotus exige at buttonwillow.

Different types of CNC’s with belts and so on have lower backlash, but belts stretch, so there is always something. Sure its arguable that lead screws are so bad that its not worth it, but it does make a huge difference.

We also started to build the Y extension for the table, its 5 holes.. I could have drill pressed it…

Faced it off to make both sides parallel, using custom soft jaws to hold it. we could face mill at 12IPM , and were cutting at 0.05" which is so much better than the old motor. 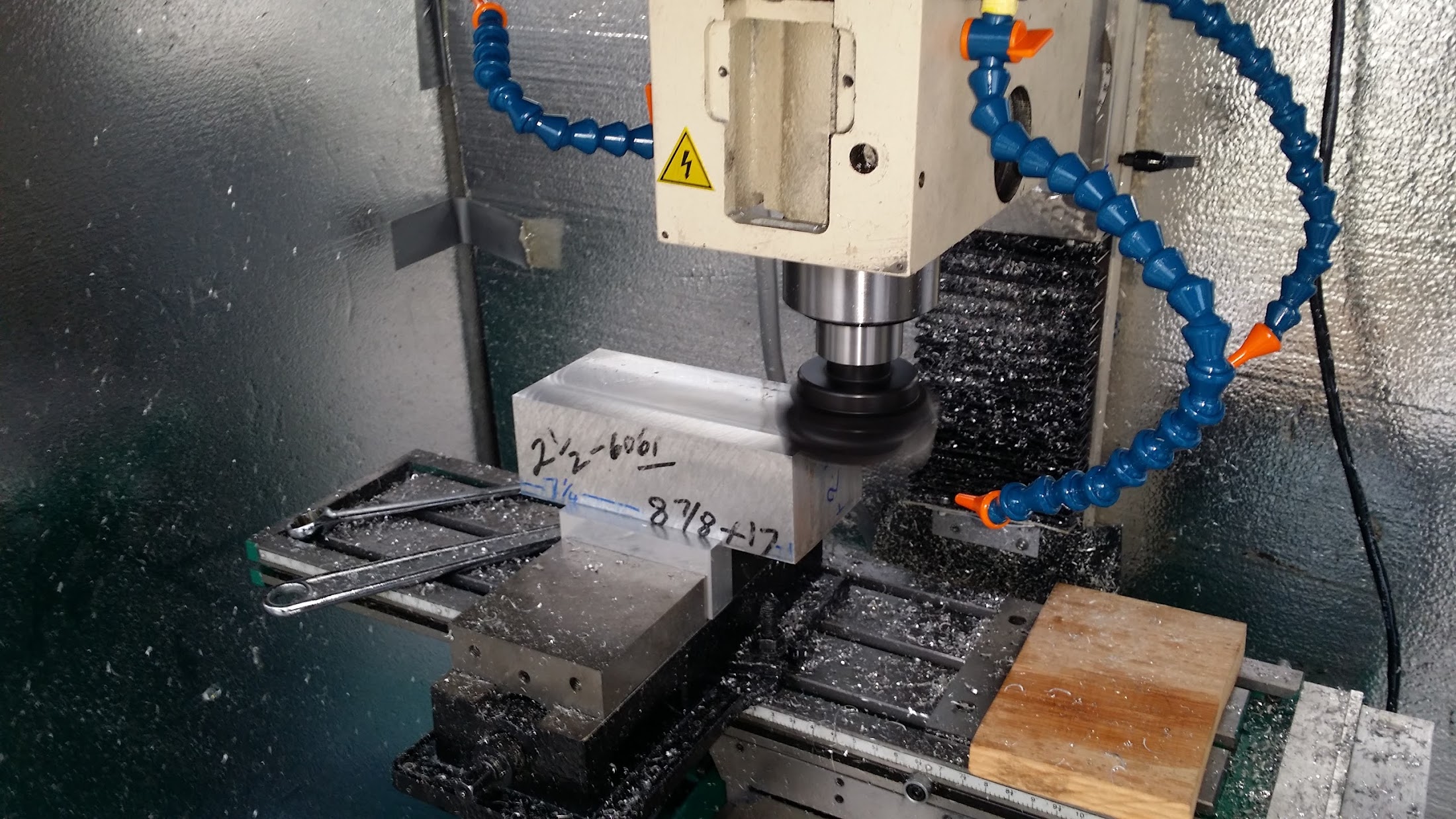 here is a finishing pass. very dull to watch, but surface quality is great.

and then drilling the holes, we ran into some more issues here, i added my own flood coolant device and lots of air, the issue was these holes are really deep at 2.5" so the chips built up in the third hole and they weren’t clearing so we broke the 3" carbide end mill, only one too so i finished it up on the drill press. This ended up being a 5 hour process, the above bearing cut only took 30 minutes… strange how that goes.

and here is a video of us , not using my awesome flood coolant system and an almost entire bottle of WD40, we’re still working on the source of that squawky metallic noise on the opposing corners, could be spindle misaligned, bearings, tool chatter, harmonics, spice girls, space radiation etc.

not ooo much interesting going on except, omg that noise.

you’d think surface quality would be altered significantly, but not really. anyway that is it for now, i’m missing the pictures of the 8 other parts we made that same day, since in the words of AvE it was chooching along. Next week, add extension cable to VFD, add filters, install RS485 link, maybe a new motor install, and finish robot (most people are just building the robot, we’re still making the machine to make the robot)

Oh and our awesome little harbor freight horizontal saw snapped its blade after many hours of cutting, popped a new one and off it went, still our favourite little workhorse, mmca even cut some 6061 stock on the hitachi 12" chop saw with a wood blade. 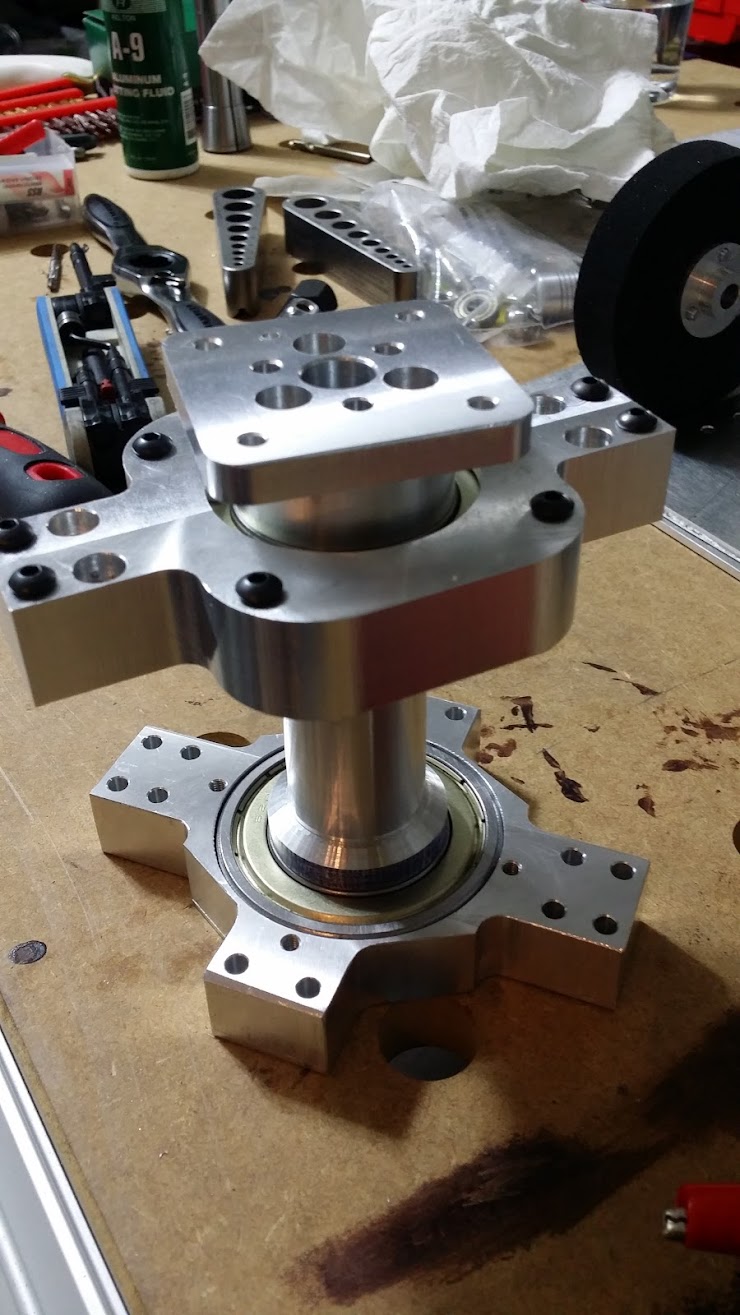