Today my KL25Z dev board arrived from Newark,  I had it on pre-order as soon as i saw it, mainly because its cheap at $12.95 +tax and because its ARM M0+ that can go upto 48Mhz. 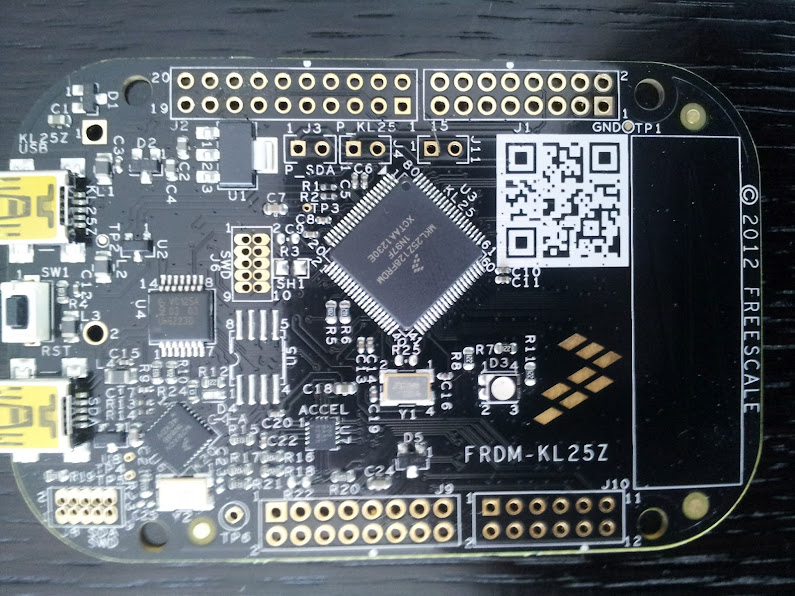 Comes in a nice box you solder the headers in if you want too, otherwise you get nothing with it ( but that’s not a bad thing ) the box has a colour print diagram of the connections to the board on the underside and its a nicely packaged. 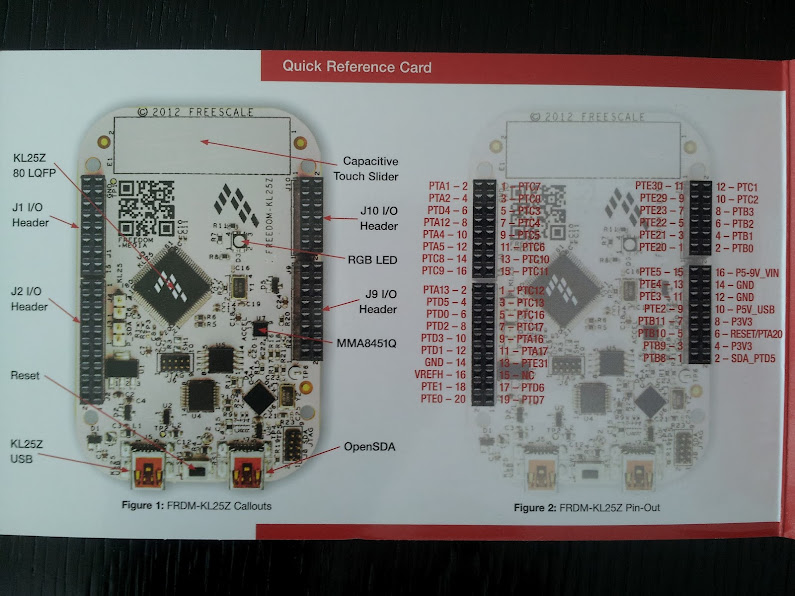 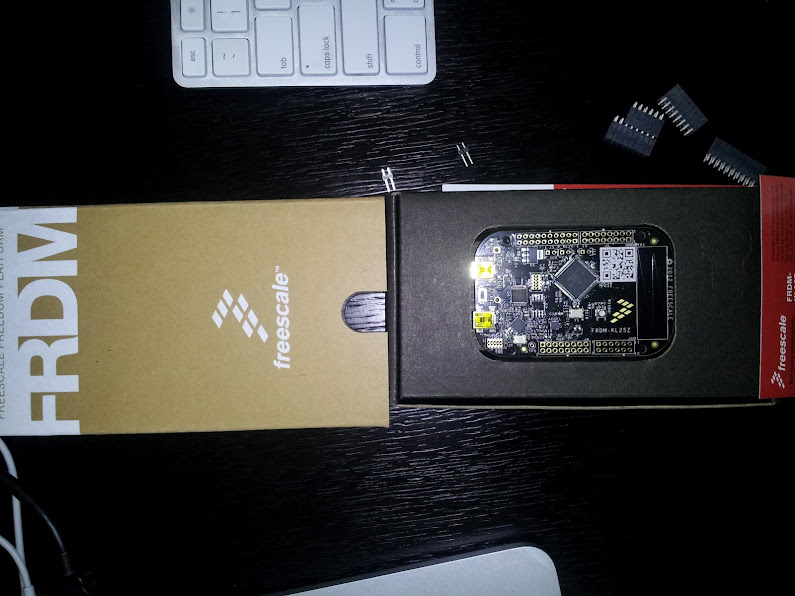 Oddly, or not, the first thing I noticed was an unpopulated spot for an IC U5, a quick scan of the schematics and its for an AT45DB161D which is a 5V tolerant 3.3V SPI flash memory chip. Which is great because I just happen to have a stack of 16’, 32’s and 64’s at NullSpace. I’ll update the blog when I add it and see if it works, it is a fairly costly IC so that might be why its not included versus a build mistake.

Underneath there is a space for a CR2032 PTH battery holder.

It is a very nicely laid out board, going for the black mask with gold finish. Though placement of the RST button could be better, the placement of the pads underneath mean when you press the reset the board flips up, less so when the USB cables are plugged in, a minor annoyance. The captouch could also have done with something underneath as well, its just slightly off balance, again very minor and easily fixed.

I dunno how I feel about the P&E stuff, Freescale must own stock in them or something, I have a bunch of P&E BDM’s, cyclones, cpu32/cpu16 etc. which i use for my reverse engineering work but they’re expensive and the software is about 1990’s level of basic, everything is an add on cost, the flash tool is one cost, programmer/debugger, capacity on the cyclone max etc. Also they don’t have a lot of protection, I’ve blown up my cyclone max with a bad PSU,  for such an expensive tool its poorly protected.

Talking about questionable software, my old friend CodeWarrior rears its head again, anyone who has been in game development for a long time, especially console, probably has a special place for CodeWarrior, along with the Sony CD burners for PSONE. Freescale/Motorola bought them out a long time ago and so of course it keeps coming back to haunt me, and haunt me it does. Still I’m sure its gotten better?… I’m not sure why TI/Freescale etc wants to roll their own dev tools, maybe for QC or lock–in but GCC is OK enough to use it and ARM were smart and paid someone to make the ARM support better in GCC. Beyond that CodeSourcery seem to do a good job of keeping it all together. Maybe I do want to download another 1.5G Eclipse installer (not CW thankfully). I think its a mistake going down this route, but there you go.

Keil  (needs a patch )and IAR have tools as well,

Anyway enough of that, at least they’re trying and giving away what they can, my beefs lie with them mostly on the commercial side of things anyway.

This is what the OpenSDA firmware zip file contains

So no tools host side needed as such, just firmware for the connection to CW/PE multilinks.

It supports ETM and SWD, OpenSDA this doc goes over how to setup and upload files.

Its an CDC driver that should auto install on Windows, there are drivers for it available if not. After that its drag and drop binary or Motorola S record files, they note that the dev tools work primarily on Windows but CDC obviously works on the other platforms.